Kraken D'Waggin (born Alexander Jon Charles Lyons-Rothery on 26th March 1986, in Wigan, England) is an anthropomorphic dragon/raptor hybrid that ranges in height from 15 ft to over 10 miles tall. Kraken first appeared in the furry community on Lava Dome Five in 2000. He is on Second Life, Faibanx MUCK, and various instant messengers.

The name Kraken is not from the mythological creature, but from mixing syllables together. His surname, D'Waggin, was inspired by a Chris Sawyer picture entitled Dwaggin.

In late 2006, Kraken had moved down into London and established himself within the London Furs, but in early 2008 he was forced to move back up into his home town of Wigan, living with his parents, he now frequently attends Manchester Northern Fur meets.

He has no plans to go to any convention in 2008. In 2009 he wants to attend Anthrocon, Eurofurence and RBW 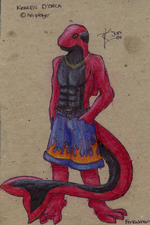 He is a 8.9ft tall Red and Black Orca and came into the fandom 3rd June 2007 when Kraken D'Waggin was visiting his friend Ferkahhan and talked about the idea of a new orca character, Ferkahhan then drew a picture of Kraken D'Orca the same day The name "D'Orca" is just a play on the original name "D'Waggin" which loosely means Dragon, "D'Orca" roughly sounds like 'The Orca' when said, so it means 'Kraken The Orca'

Kraken's friends where shocked and surprised by the revealing of D'Orca, the main reaction was that people thought that D'Waggin was going to be surpassed by D'Orca which wasn't the case, D'Orca is an alternate character for online role playing which also will be used for Kraken's first fursuit.

The other reaction is that most people preferred D'Orca to D'Waggin and would like to see more of him, Kraken has taken this on board and represents both D'Waggin and D'Orca when attending furmeets.

Kraken has started to get into the fursuit scene, he planned to get a suit done of his orca character by Joecifur before RBW, but due to his employment status he had to put off getting the suit until 2008.

As of July 2008, Kraken had not gone any further with getting a suit from Joecifur but he does have a suit planned which a friend of his will be designing and constructing, he has no idea when it will be finished, but materials have been picked, opting for a non-furry material, he hopes to have it finished by the end of the year.