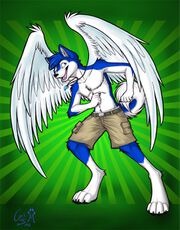 Koush (short for Koushirou, born October 22, 1989) is a member of the Brazilian furry fandom who used to live in Santos, São Paulo, and now lives in São Paulo. He has been involved in the fandom since 2006, and his fursona is a blue husky who can be drawn with or without wings.

Otaku to the bone, has cosplayed as Naruto, Dumbledore, Guilmon, among others. Lived in Japan between 2014 and 2015, and plans on returning there for his MsC or PhD. As a bookworm, he loves Harry Potter, Tolkien, fantasy and science fiction. His eReader is always with him because, you know, you can always read just one more chapter.

In real life, has a bachelor's degree in Biological Sciences and is taking his MsC in Biotechnology.