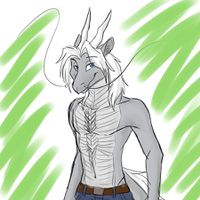 Koga SilverDragon (born January 30, 1989) is a "half eastern and half western" silver dragon who lives in Curitiba, Paraná, Brazil. He joined the Brazilian furry community on December 10, 2006.

Koga is an atheist, otherkin, and brony, and has a great passion for games.

Koga has a graduate's degree in System Analysis from the Centro Universitário Campos de Andrade, and a post-graduate degree in Game Development from the Pontifícia Universidade Católica do Paraná.

Koga works as a front-end developer.[1] He does not work in the game industry, but he attends indie game development events (known as game jams) such as Global Game Jam[2] and Ludum Dare.[3]

Koga was an administrator of the FurryBrasil forum and news portal, and he was on the Activities and Help Staff of Abando 2012.