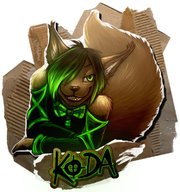 Koda was born in East Providence, Rhode Island, becoming interested in and subsequently joining the fandom around 2008 while recovering from surgery.[clarify]

As of September, 2014, Koda is a student majoring in Music Composition, with a minor in Education, attending the University of the Arts in Philadelphia, Pennsylvania

Koda has been a pianist since the age of ten, and has subsequently become well versed in clarinet, bass clarinet, ocarina, guitar, and taishokoto. Although Koda primarily focuses on a pop star image, much of his music applies disco, funk, and electronic musical ideas as well.

Despite having various musical influences in his life, and experimenting in different styles, Koda pursues a visual style much inspired by Kpop, consisting of various colorful and unique outfits, and extensively planned choreography. Many of his songs which include lyrics, despite being influenced by a variety of styles, incorporate the "rap breaks" that have become a staple of Kpop. His primary influences are VIXX, Fox Amoore, Deerhoof, T-ara, Parliament-Funkadelic, Stellar, and B1A4.