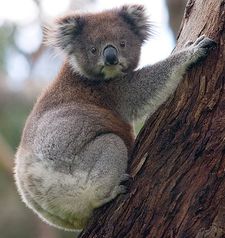 The Koala (Phascolarctos cinereus) is a small herbivorous marsupial, typically found in coastal regions of eastern and southern Australia. Despite its name, the koala is not a bear.

Koala fursonas are typically chosen by Australian furries, due to the fact that koalas are one of the national symbols of Australia.