KnifeH (aka: Nife, Nifey) is a furry artist from Sweden who currently resides in The Netherlands.

Nife's artwork mainly involves pinups of his own characters, mostly females. To this known date, he only has one male character that he has ever officially created, which is his own fursona. Although he is inactive due to busy work and life, he tends to upload artwork when the possibility strikes.

Nife's fursona is a dragon of unknown type, colored fully green with the exception of a blue/light-blue underbelly which reaches from his collarbones to the tip of his tail and some yellow zig-zag marks on his back to his tail. He have 2 yellow marks on each cheek and his upper limbs and lower limbs are colored in a dark green color. His hair is brown and very spiky with a short length of hair at the back of his head. His tail also have this feature, but tends to be longer and in a more feathery look. 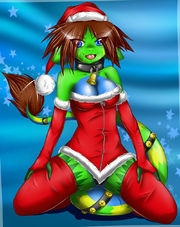 Nife tends to switch between male and female, and vise-versa, depending on the artist's preference.

Other characters noticeable that he has created are Kiira (unknown species which has a combination of a dragon and a fox), Kiyo (dragon) and Thea (mixture between a dragon and some unknown feline creature). All of them are female.

Nife currently works as a IT specialist in a senior/mentor position. He's engaged to Tak. He has a few online brothers and sisters as well (Katsuke Saito, MN XenX, Metal-Renamon and Kaeko).