Klepsydra - Drawn by The Gneech

Klepsydra is a British fur, resident in London. She is sometimes known by the abbreviations Klepsie, Klepsy or Kleps, plus the soubriquets 'Ears and Whiskers', 'Six String Leopard' and 'the Legal Leopardess' (she is a qualified lawyer, one of few such within the worldwide furry community).

Her usual fursona is an anthropomorphic leopardess. Her name is a transliteration of the Greek for 'hourglass' and suggests her fursona's somewhat curvaceous figure, although as she freely admits, if she had known she'd become as deeply involved in the furry community as she has, she would have chosen an easier name to spell.

Klepsydra's interest in anthropomorphic animals and similar topics has been lifelong, but she only happened across the furry community per se in early 2003, attending London furmeets from that point (as she still does) and forging contacts online with furs the world around.

She has also attended a number of conventions:

She is a regular attendee at Spiritfurs gatherings and has accompanied them on their annual canal boat weekends since the first such event.

She is no artist, but has been known to pen furry fiction, and has ambitions to complete and publish furry novels now that her time is no longer being occupied by law school. She has also written comic scripts for Wardy and Kashyfox, and has scripted a long series of scripts under the name "Ragged Heroes", which presently languishes undrawn for want of a collaborator.

She has links with the Hantsfurs, as a former resident of Portsmouth, and has occasionally been linked with TigerTails Radio, most notably in her spectacular performance of Motorhead's "Ace of Spades" which has been replayed on the station several times subsequently.

She is also a songwriter and guitarist, and with her long-time partner in crime Camrath, is a member of The Donutsh who regularly gig at music venues in the London area, and have also performed at furry events. 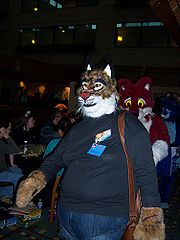 Klepsydra presently resides in a furry houseshare in London with two other furs.