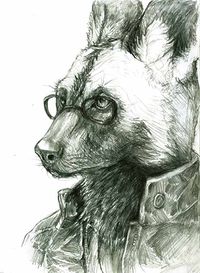 Klaus Wolfsmann, also known as Brotch Blackheart,or Sascha Kant, is a furry who lives in New Market, Tennessee. He was born on the 12th of November and was born under the zodiac sign Scorpio. He is German by blood, his favorite line from "Das Deutschlandlied" or "The Germany song" is "Deutschland über alles in der welt", and he is a very resolved German in many of his decisions. He enjoys video games, horror movies, swimming, poetry, Zen philosophy, and the fandom. His musical interests include Rammstein, Sabaton, Nena, DJ Manian, and several others.

Klaus discovered the fandom in 2009. He enjoys furry art, Jay Naylor's comics, and Twokinds. He wears his ears and a tail and promotes the community of furries whenever possible.

Klaus has several fursonas, but his main fursona is a werewolf who is about 5' 11" and weighs 120lbs. His hair is cut in a military flat top, but is known to be grown out in a long, wavy fashion. His fursona has black fur with silver streaks through it along its back and through its hair. His other fursonas include a fox and a cat. He wears a large black collar with a large bell on it.