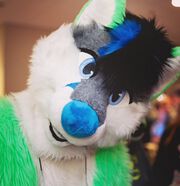 Kiwi Fox, often shortened to simply Kiwi (real name Kyle Jones; born December 25, 1985), is a fursuiter and YouTuber who lived in Pittsburgh, Pennsylvania, USA.[1] He was previously from Westminster, Maryland before moving in with roommates Majira Strawberry and Frankie x in the Pittsburgh area. Afterwards he moved to Akron, Ohio.

Kiwi's fursona is a green, white, grey and blue fox. The primary color of his design is bright green. His hair is black with blue highlights.

Kiwi has been part of the furry fandom since 2003 and his YouTube account dates back to June of 2006. The oldest viewable content on Kiwi's channel dates back to November 2016 featuring a one minute sketch of Rick and Morty and a charmeleon fursuiter.[5]

Like most furry YouTubers, Kiwi makes content of an informative nature to the furry fandom as well as occasional short skits. He states in his YouTube's About Page that he "enjoys making content that brightens anyone's day." He also does livestreams often at least once a week. His livestreams have since mainly moved over to his Twitch channel.