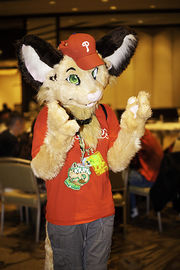 Kium ( pronounced K-eye-uhm ) is an artist, writer and fursuiter who lives in Florida, U.S.A.[1] She describes her fursona as "Chatinroo. A species I made that's a mix of cat, rabbit, and wallaby."[2] Kium attends SCAD , studying for a BFA in Sequential Art. [3]

Kium began online on DeviantArt as solely a feral artist in 2007 and later moved onto Fur Affinity in 2010 and later on started also drawing anthropomorphic characters. It wasn't until 2011 did she finally acclaim herself as a furry. Although she wasn't very fond of the idea of anthro characters at first she had always loved animals. At an early age she began to draw and took up other interests along the years in fantasy, comics and writing.

Kium was featured for Fat Bunny Agenda on the front page of Fur Affinity for August 2013.

Kium's second fursuit made from 2013 to current was made by Blarmajin from Creature Feature Furbrications. [5]