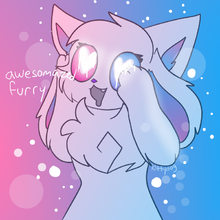 Kittydog (Real Name: Zola, born February 6, 2003) is an animator, artist and YouTuber from Seattle, Washington. They are possibly best known for creating furry based animation memes featuring their main OC Crystal who is also considered to be their fursona. They are genderfluid between female and agender and their pronouns are she/they. They are currently the most subscribed channel in both the animation meme and furry communities with over 600,000 as of July 2019.[1] They also do fursuiting videos on their other channel Kittydogcrystal as well.

Kittydog started her main YouTube channel on May 3, 2014. Most of her content usually consists of flash-animated memes featuring her characters which includes her main character, Crystal. Her characters are generally considered to be gender-fluid as well. Kittydog is also known for being involved in the creation of many memes in the animation meme community. Her fans are called “Waffles”, and she has over 600,000 subscribers.

This channel which is referred to "kittydogcrystal" was created on August 3, 2018 after Kittydog decided against uploading her fursuit content on her main channel after doing a poll on YouTube. She currently has over 22,000 subscribers on the channel.[2]

As previously described, Kittydog uses her characters in her animations. She created a fictional universe which is called "Timeline Universe", while her characters live in “Pufflefluffia” There is an alternate universe, called the Void Universe where there are less rules.

The main characters of this universe include: