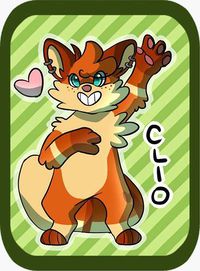 Clio, as drawn by Nitteh.

KittyClio became a curator of Furry Amino in September 2017.[2] In addition to her curator role on Furry Amino, she co-hosts the Art 101 and Available Artists segments in Furry Weekly.[1]

KittyClio's fursona is a female house cat named Clio. Her fur is primarily ginger, with darker stripes on her tail and back, and lighter cream countershading and facial markings.[3]