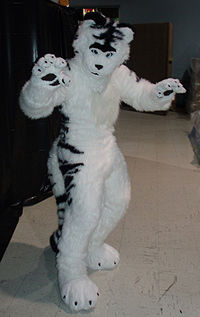 Kitt3ns (also known as kittensftw) is a white tiger furry who lives in New Castle, Delaware, U.S.A. He is originally from Sussex County, Delaware, and moved to Newark to attend the University of Delaware. Shortly after arriving, he found that college life did not suit him well, and decided to pursue other interests. He later moved to New Castle, DE. After becoming more involved in the fandom, Kitt3ns became a head administrator at The Furst State, Delaware's furry social group.

Kitt3ns plans and organizes the monthly Delaware Furbowl meets for The Furst State. Kitt3ns is a video gamer and computer enthusiast. He swam competitively in high school and enjoys the water as much as any real tiger.

Kitt3ns owns a fursuit commissioned by Spiritwolven of his white tiger fursona. The Kitt3ns suit debuted on Main Street of Newark Delaware on Halloween of 2008.

Kitt3ns served as co-head of staff at New Year's Furry Ball 2010-2011. Noted among the local furry community for his job organizing the Delaware Furbowl meets, Kitt3ns was asked to serve on staff for FA: United 4 and Anthrocon 2011. At Anthrocon he will be participating in helping run Con Ops.