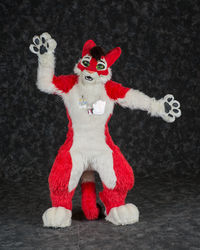 Kitkat Cabbit posing for a photo

Kitkat Cabbit is a fursuiter and fursuit maker who lives in Show Low, Arizona,[1] and attends various conventions across the United States. He is the creator and owner of Furever Studios fursuits. Their fursuits are built lightweight and breathable!

Kitkat is a fursuit maker. He started making suits in 2014 and is a founder (and, as of August 2018, the only member) of Redstorm Fursuits. They make many different types of suits, though they specialize in making heads with moving jaws.

Kitkat's fursuit is a red and white cabbit (cat-rabbit hybrid) fullsuit. The head, paws, feet, and tail of the suit were made by Furry Machine (a Brazil-based suit maker), and the bodysuit was made by Redstorm Fursuits.

The suit was originally made for Eclipsen,[2] who had the suit for the first few years of its existence. Furry Machine and Eclipsen ended up selling the suit with plans of making a new version of it eventually. Eclipsen's character has a darker red fur (more maroon) and a darker cream fur than Kitkat. Both Eclipsen and Kitkat are okay with having an "almost" twin out there somewhere. Kitkat's differences include two lines on his tail instead of one, a shorter mane down the spine, and lighter fur colors, although these marking differences only show up on art and not the suits.