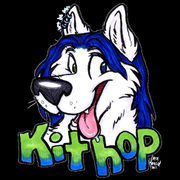 Kithop (born October 23, 1985), is a fur and musician from Mission, British Columbia, Canada, part of the local BC Furries community, and tends to frequent Equestrian Dawn, retaining accounts on FluffMUCK, SPR, FurryMUCK, and Second Life.

Kithop was also the Operations Lead for VancouFUR 2012, IT Lead for BronyCAN 2017, returning as the IT Secondary for VF 2018.

Kithop is the current Site Admin for Equestrian Dawn.

His character is an anthropomorphic Arctic Wolf.