Kit: The Adventures of a Raccoon

From WikiFur, the furry encyclopedia.
Jump to: navigation, search
Culture > Publications > Novels > Kit: The Adventures of a Raccoon 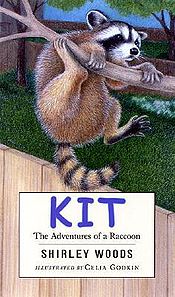 Kit: The Adventures of a Raccoon is a novel by Shirley Woods, illustrated by Celia Godkin. The copyright year of both the text and illustrations in 1999. The book was "First published in the USA in 2000", with a third printing in 2001. In Canada, it was published in paperback with the ISBN 0888993765 by Douglas & McIntyre.[1]

The title character is a male Raccoon, born at the beginning of the book, and mature by the end, when he follows a female Raccoon, Rosie, to her den. Throughtout the book, the characters are named and their reactions described, but the only diaglogue is from human characters.