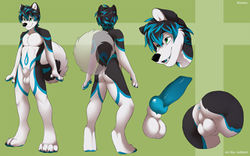 Kisuka (born 1991) is a fur who lives in California, United States. Kisuka had always been interested in furries or anthro characters when he was growing up. He began to get more involved in the fandom in 2007, when introduced into it by one of his friends, Fox Fable.

Kisuka has been involved in a variety of projects online. Some of the project he has worked on include:

Kisuka's fursona is a male Husky that has black and white fur with blue paw pads and markings. His personality is playful and silly.