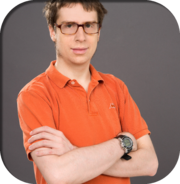 His fursona is a three-tailed kitsune with white fur and tribal markings in yellow, orange and brown.

Kira Resari publishes his games and stories under the label tri-Tail. The motto of tri-Tail is "Bring Color to the World",[3] and its logo is a three-tailed kitsune; white, with the topmost tail yellow, the middle tail orange, and the final tail brown. (In 2014, Kira changed his fursona's original gray fox appearance to his kistune form in order to match the tri-Tail logo).

The Chronicles of Ceal logo, featuring a puky as the latter C 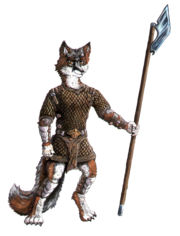 Kira's long-term project, "The Chronicles of Ceal",[4] is centered on a world partly inhabited by dragons, gryphons, and other anthropomorphic characters. The eight distinctive species are:[5]

"The Chronicles of Ceal" also features Pukys; small, cat-sized Iserial beings which are the mascots of the series. They are generally helpful and curious, doing their best to help people around them. However, they can also be whimsical and mischievous at times. They tend to get along great with the Sprites.

The most prominent theme of the world of Ceal is the attempts of these species to co-exist with one another, and the tensions that arise due to cultural and biological differences. As such, racism, prejudice and dogmatism are recurring themes.

Another distinctive feature of the world of Ceal is Iserialogy, the science concerning the manipulation of Iserial Energy, a force permeating the world of Ceal. It can be channelled by skilled individuals to perform magical feats, and special Iserial crystals can be used to greatly amplify one's inherent abilities. Effectively, it is the equivalent to magic, but on a much more sophisticated level. It is as ever-present in the Ceal world as electricity is in a real life modern city, and is used even by common people (using Iserial crystals) for a variety of purposes. In the world of Ceal, Iserial Energy is subdivided into twelve sphere elements which are arranged on the element sphere, as well as two transcendental elements which stand outside the spectrum.

As of 2016, Kira has been promoting The Chronicles of Ceal on Facebook and Patreon. His current project is writing a novel around the events of the Crystal Seal Chronicle.[6][7]

The title font of Ecchnasi

"Ecchnasi" is a board game for two players, designed by Kira Resari.[8] It features two packs of wolves competing for dominance, with the players attempting to get one of their wolves recognized as "Ecchnasi", or great leader. The game features mechanics similar to checkers and chess, with the players moving black and white pieces around an 8x8 game board.

The game rules are simple, but allow for a lot of tactical depth, and a single match takes about 60 to 100 moves, lasting around 15 to 30 minutes.