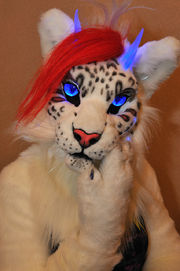 Kira Flurry's fursuit, created by herself.

Kira Flurry (also known as Monoyasha) is a fursuit maker who currently lives in Texas, USA. Her fursona is a leopard-dragon hybrid, and she owns a self-made fursuit of the character. Monoyasha and Ciara operate DreamVision Creations.

Monoyasha's costumes and partials are primarily "realistic" looking suits rather than "toony". She is known for her quadsuits, as well as detailed heads, which can include glowing resin eyes, realistic and moving mouth/jaws, and various LED additions (including claws, and whiskers, as well as eyes). She has created several unique quadsuit and jointed leg designs in order to feign a more realistic gait for the costumer.