Originally from Kirkland, Washington, Kijani joined the furry fandom in April of 2008. In December of 2008, Kijani organized the first major fursuit bowling meet in the greater Seattle area, When Furballs Strike (WFS), at Kenmore Lanes in Kenmore, Washington, with 40 attendees.

In real life, Kijani graduated from the University of Washington in December 2007 with a B.A. degree in Journalism. He currently works as a casino dealer after spending five years in the community newspaper industry as a sports writer and newspaper editor. 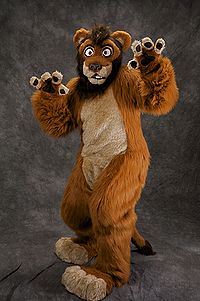 Kijani's lion fursuit commissioned by the Furducers of Tempe, Arizona 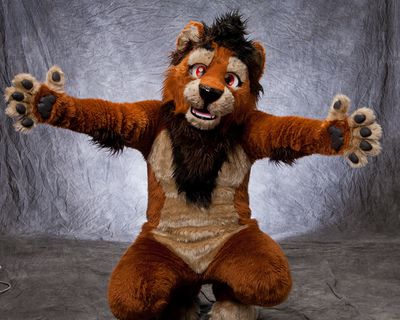 Kijani has a deep affection for lions that began in 2004 when he watched The Lion King to write a college English essay. Many years later, after re-watching the film, he felt a strong connection to the leonine characters, and the story of Simba in particular. Soon thereafter, he started collecting various merchandise and memorabilia from the film, and currently owns over 1,000 items in his collection, which won a People's Choice award at the Western Washington (Puyallup) Fair in 2006.

As the years passed, Kijani’s love for TLK soon translated into a strong connection to African lions as animals. In early 2008, he began researching the furry fandom after watching videos of fursuiters performing and various furry conventions on YouTube, and on April 12, 2008, made the decision to join the fandom. Kijani believes that the furry fandom is a wonderful creative outlet, while allowing the ability to brighten the lives of those around you, whether they are friends, family, children, or others in the fandom.

Kijani owns two fursuits: Kijani, (based off of his fursona), and Kato.

Kijani's second suit, Kato, is also a lion and made by Snap_E._Tiger of www.bycats4cats.com. Kato is the mutated twin brother of another one of Snap's suits, Marf Lion, and was born with a genetic defect that gave him green eyes and dyed streaks of green into his mane.

Kato features a static jaw and digitigrade legs sewn into the body suit. He debuted at Rainfurrest in 2009. 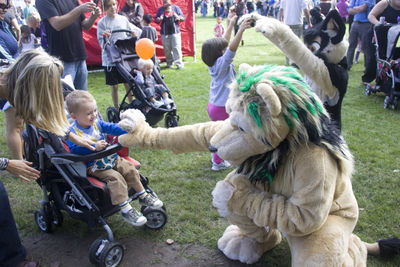 Kijani, as Kato Lion, interacts with a youngster during Issaquah's Salmon Days festival in 2011

With over 14,000 subscribers on his YouTube channel, Kijani's public fursuiting videos have inspired and touched the hearts of many in the furry fandom and beyond.

Along with documenting each of his public fursuiting experiences through video, Kijani has also produced a compilation video series, called "Fursuiting: For the Kids, and the Kid in all of us" that has over 80,000 combined views, and a special short film series called "The Magic of Fursuiting" which contains quotes from members of his local public fursuiting group.

Fursuiting: For the Kids - 3rd edition

Fursuiting: For the Kids - 4th edition

Fursuiting: For the Kids - 5th edition

Fursuiting: For the Kids - 6th edition

Fursuiting: For the Kids - 7th edition

Fursuiting: For the Kids - Convention edition

The Magic of Fursuiting

The Magic of Fursuiting II

In August 2013, he founded Emerald City Critters, a nonprofit organization based in the Seattle, Washington area specializing in character performance for community and charity events, festivals and parades. Some of the events the Critters have attended include one of the state's largest festivals, Issaquah Salmon Days, and the Susan G. Komen Race For the Cure.

Putting his Bachelor of Arts degree in Journalism to good use, Kijani was also a volunteer staff writer for the Furry News Network.

From 2011-2013, he contributed a bi-monthly (formerly monthly) feature called "Featured Fursuiter of the Month" for which he writes an article detailing a well-known fursuiting personality in the furry fandom, offering a "behind-the-mask" look at their characters and their contributions to the world of fursuiting, how they got involved with the furry fandom, and their lives outside of the fandom.

He owns one of the largest Lion King merchandise and memorabilia collections in the world, comprised of over 1,000 individual items.

He appeared on the American game show Wheel of Fortune in October of 2004 and won $36,830 in cash and prizes, fulfilling a lifelong dream.

He is also a huge fan of The Lion King on Broadway stage musical and has seen the show in a total of 18 times in seven different cities (Seattle, WA; Portland, OR; San Jose, CA; New York; Orlando, FL; Tempe, AZ and Shanghai, China) around the world.

Known as one of the furry fandom's top bowlers, Kijani has bowled 10 perfect 300 games and one USBC-sanctioned 800 series, and has recorded a high league average of 219. He won a collegiate singles bowling title competing for the University of Washington at the Aggie Bowl Invitational in Utah in 2005, and most recently won the Greater Seattle USBC Oktoberfest tournament in October 2011.