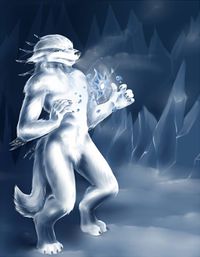 Kiba Snowpaw's fursona, made by Danji Isthmus and paid by Azeliah as a gift to Kiba Snowpaw

Kiba Snowpaw (born December 17,[1] 1986), real name Ronnie A Borgquist, is a furry whose fursona is an ice wolf. Raised in Copenhagen in Denmark, he later moved from city to city.

Kiba is known for his anime website and freelance photography.

Kiba was born December 17, 1986, on a stormy night in Copenhagen Rigshospitalet. He was born a weak puppy. He was in and out of the hospital beside that he also had a talking problem as a puppy because his tongue and palate did not cooperate. At the age of seven, he was sent to a Cub home because no school would take him, they were afraid he would get bullied too much for his lack of speaking skills. The Cub home he was sent to was called Orøstrand and was on a small island in Denmark called Orø he was about 8 years old, he even got some friends there it was a great place with a lot of other cub's that had problems too. Moreover, the cub home had its own little zoo which the Cubs could go in and help to feed the animals before school. He was on trips 3 times a year everything from Canoeing, Army Trips to Skiing he even had a speech therapist for the 8 years he was there. He only got to see his families in weekends also his father moved to a trailer park that was close by so he could be closer to his son where Kiba visit him every first weekend and his mother every second weekend in Copenhagen. It was 8 long and Non-Forgettable years of memories not all bad most excellent but long none the less. And when he was about 15 years old, then it was time to leave that place to learn how to live alone. Orøsteand had a system where you will be living with 3 other boys sharing a house and get a payout each month, just as if you had a job not much money just so you can buy food and things you need. Kiba never really like school, but he knows that he had to so he could get a job he did a lot of different courses over the years to see what he wants to spend his life with. He never really found anything he likes. Kiba was at a boarding school for 3 years where he meted one of his best friends he still has today. In 2008 he was on a course as a security guard and later in (2013) he trained as a zookeeper assistant. But there were no jobs to be found After for whole 6 years he was in the system looking for a job while living at his father at the age of 26 he got a job as a security guard and worked there for about 2 years all in all with a pause in between. After that, he was looking for a job again for about 2 years when he ends up working in a supermarket where he works today.