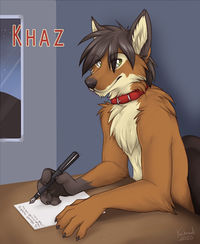 Khaz is a furry writer and musician from Ontario, Canada.

Khaz first presence in the furry community was via Furry2Furry. He was a moderator for it for several months until his resignation in April of 2007. Around this time Khaz created a similar forum called The Den, which remained active until its closing in February 2010. He has been known to frequent nearby major furry conventions.

Khaz can be found most reliably through his Fur Affinity page. He also has an account on SoFurry (as Khaz), though this is rarely used.

Khaz' fursona is a cross between a timber wolf and an Ethiopian wolf, with more of the physical build of the former and the coloring of the latter. He is usually seen wearing a red collar.

Khaz began playing the piano in 2000, and later took up writing. He is a member of the Furry Writers' Guild, and his written works can be found on his Fur Affinity account with three exceptions: Learning To Live and True Color published in Heat #6 and #9, and Al Coda as found in Roar #3.