Her main language is Canadian French, though she is fluent in English.

She goes by the nicknames Kelly, Kelly B., Kellz (though she hates it, only her close friends can use this nickname) and RainbowSpots.

The person behind Kelly BlackWolf[edit] 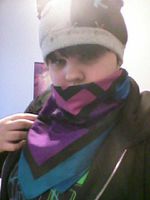 Kelly-Ann Thibeault, picture took by herself, 2013.

Kelly-Ann Thibeault is a Canadian girl living in Quebec, just like her fursona Kelly BlackWolf. Her main language is French, but is also fluent in English, hence why she gave this attribute to Kelly BlackWolf. She is an out-going yet somewhat shy girl. Though, she is very open-minded and friendly towards people. She likes meeting people despite her shyness. Usually, when she meets people, she must be the first one to go towards them to know how they are. She has a special way to make friends; instead of talking to them, she observes them. The aura surrounding them is what Kelly-Ann is looking for. She trusts people from the energy they emanate, and her own, and sees if they are compatible. Some people may find her strange with this way of doing, but this is very important for her. Also, her honesty had put her in some trouble with certain people.

Kelly-Ann doesn't consider herself as a girl, but more like a genderqueer. Her gender-fluid clothing style, somewhat punk-like gives people the feeling of being around a guy when she's dressed up in a more masculine way, and around a girl when dressed up in a feminine way. Also, her personality changes depending on the way she is clothed. When she is dressed up in a masculine way, she tends to be quieter and more observant about people. When dressed up in a feminine way, she tends to be closer to her friends and talks with a more high-pitched voice. She tends to wear a lot of bracelets,studded stuff, ties, hats, scarves, gloves and so on. She wants her style to be unique as she doesn't want to look like everybody else. She's often being considered as the black sheep with her family especially for her way of thinking and clothing.

On the picture, she is somewhat dressed like her character, Kelly BlackWolf.

SkullKATStudios, even though hasn't been used since a long amount of time, was created in 2010 with an art trade Kelly-Ann has with a friend. But now, this logo has a longer story. The logo itself is of a cat's skull, since Kelly-Ann had a pretty dark sense of things. The second part, KAT, is a mix between cat, hence the skull, and also an acronym for Kelly-Ann Thibeault, the creator of the logo. The word studios is only to add more professionalism into the artwork itself.