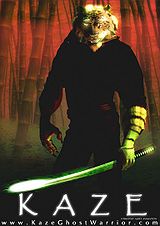 Kaze: Ghost Warrior is an independent, computer animated film featuring anthropomorphic animals as the world’s inhabitants. The 22-minute pilot episode, created entirely by Emily Amadhia King, is intended to be viewed as both the first episode of a projected series, and as a Lightwave technology demo.

As a story, the pilot episode is reminiscent of Japanese anime. It opens years after a coup overthrew the royal family that had ruled the land for hundreds of years. Corrupt rulers now own the land and their enforcers harass the people at whim. The people fear to speak their minds, lest they be punished or killed. A mysterious tigermorph appears in a tavern and fights back against these enforcers. Exactly who he is, what happened to him, and what his purpose is now are not directly stated, but the ending implies continuation in future episodes.

As a technology demo, the film is a remarkable visual achievement, showcasing animation and rendering techniques that until recently were only accessible to professional studios.

On the DVD, Timothy Albee states that he was aiming for a balance between cartoony animation and hyperrealism, and that the style of Neo-romantic paintings was the inspiration for the visuals. To achieve this unique look, Ghost Warrior utilizes depth-of-field effects to draw the viewer’s eye to certain parts of the screen and create a more dramatic mood. Subtle lighting and sweeping camera movements that are very much anime-style also serve the same purpose.

These techniques are seldom seen in mainstream CGI, where everything is in sharp focus and the camera is often stationary. All of this combined sets Ghost Warrior apart from the work of professional studios. This was the creator’s goal: using the tools currently available to create something different from what is considered normal CGI.

That said, the initial release of Ghost Warrior is not perfect. There is some bad physics, sound hiss, nearsighted depth-of-field shots, confusing camera angles, some missing sound effects, and the insides of the character’s mouths are not rendered correctly (especially visible in the final scene). But one important point should be remembered: this film is intended as a "Proof of Concept." It is meant to show that an amateur with a low budget and consumer-grade equipment (totaling less than $5,000) can produce animation that is comparable to large, commercial Hollywood studios. 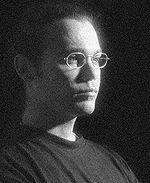 Kaze: Ghost Warrior has played at many furry and anime conventions, and has built a following among furry fans. It is available for purchase in DVD format from the official website. The creation process is detailed in Albee's book, CGI Filmmaking: The Creation of Ghost Warrior.

The second episode of the series is currently in development and Albee hopes it will be ready for screening by summer 2007 [1]. A touched-up re-release of this feature is also planned, and may include such polishing touches as tails for the characters, a voice for Utsukushii, and "an in-depth scene between Kaze and his father talking about Kaze's disappearance and return."

A feature-length prequel is also in development.

The entire episode was uploaded in three parts on YouTube, with the permission of Tim Albee to generate views and interest to acquire funding for a full-budget Kaze feature.