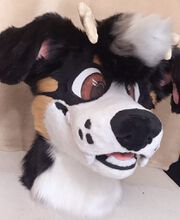 Keziah Kaufmann is an American fursuiter, vocalist, and multi-instrumentalist from Great Falls, Montana, currently residing in Tucson, Arizona. His main fursona is a Bernese Mountain Dog of the same name. He releases music under the solo moniker LOVE//LOST, of which he writes and performs as both a vocalist and instrumentalist. Keziah has been fursuiting since 2011, where he made his debut as the Siberian Husky named Kaskae at Rocky Mountain Fur Con 2011.

Keziah was born in January of 1993 in San Antonio, Texas. Before discovering the fandom, he was raised as a military dependent, with both parents having served in the United States Air Force. He is the only son of four children, having three sisters. Keziah lived in many places during his childhood, to include Germany, Turkey, New Mexico, and Montana. Due to the high frequency of moving as a military child, Keziah often relied on animated movies to help adjust to new places and events in his life. Films with predominantly anthropomorphic themes were most commonly shown in his home, such as Disney's Robin Hood, The Lion King, Balto, and All Dogs Go to Heaven, to name a few. This exposure to anthropomorphic culture at a young age would eventually foster an interest in organized fandom activities during his teenage years.

Keziah is openly gay, having married his spouse in 2015 after the federal legalization and recognition of same-sex marriage. His husband is active duty in the United States Air Force, where Keziah has previously been employed as a civilian while residing in Montana. He is currently employed with another federal agency in Arizona.

Keziah was introduced to the fandom in late 2010 by Tai the Fox, a high school friend with an already extensive history within the fandom. He created a fursona based on that of his favorite dog breed, the Siberian Husky. This character, named Kaskae Kaufmann, would be the main focus of short stories and commissioned art pieces. He established an online presence and fostered friendships around the world during this time, in addition to associating with local fandom members in his community.

Keziah participated in multiple meets organized in Montana by fandom members around the state, performing many different activities both in and out of suit. Outings included mini-golf, bowling, and general excursions around the town. These meets were held in Great Falls, Montana, often taking place once a month throughout 2011 and 2012. The meets were put on hold and subsequently placed on an indefinite hiatus, after Keziah relocated to Orlando, Florida. During his time in Florida, Keziah attended Megaplex 2013 out of suit. Once he relocated back to Montana, he would not participate in any fandom events or hold a social presence again until 2019, primarily due to the theft of his Kaskae fursuit in 2015.

He returned to fandom activities in April of 2019, releasing a song in honor of Tony "Dogbomb" Barrett. He commissioned KingKrow.co to build a fullsuit for his Bernese Mountain Dog character, Keziah, later that month. Keziah is slated to attend multiple conventions over the next year, having relocated to the southwest United States.

Kaskae Kaufmann, a Siberian Husky, was Keziah's first fursona, designed in 2010. The inspiration came from his affinity for Huskies; the name was inspired by the Inuit name for "Chief". He was Keziah's sole character until November 2011, during which he designed a saber-toothed cat and deer hybrid named Mourgan. This character has not been referenced in any media, apart from the original conceptual artwork created by the artist m0chi.

His current fursona, Keziah, is a Bernese Mountain Dog with a prominent set of antlers. Though originally designed in August 2012, Keziah did not feature the antlers until April 2019, when he returned to the fandom. The redesign incorporated design aspects of Mourgan, a now-defunct saber-toothed cat character. Though exhibiting this feature normally seen in deer, Keziah is not considered a hybrid species. Keziah's name was inspired by the Protest the Hero album, Kezia.

Keziah began fursuiting in August of 2011. Kaskae was constructed by m0chi, better known as Ixchel or FennecFur on Fur Affinity. The character was a partial fursuit, including a head, arms, and a tail. Performance while in suit included some speech when appropriate, as well as many hand gestures and sprinting around. Kaskae debuted at Rocky Mountain Fur Con 2011. It was there that he participated in the "Fur Your Entertainment" improv show, the RMFC Fursuit Games, and the official RMFC 2011 fursuit parade. The partial fursuit was stolen from Keziah's storage shed in 2015; it was never recovered.

Keziah's second fursuit, based on the Bernese Mountain Dog character of the same name, is currently being built by KingKrow.co on Instagram. It is being built as a digitigrade fullsuit, with completion anticipated for October of 2019. Keziah will be debuting at Painted Desert Fur Con 2020.

Cited as Keziah's top influence as a fursuiter is Buddy, a canine fursuiter from New York City, New York. After viewing videos featuring Buddy performing in suit on YouTube, Keziah proceeded to commission his first fursuit, Kaskae. Keziah also acknowledges that seeing the fursuiting episode of My Strange Addiction, featuring Ixchel, inspired him to suit without hesitation, as he found her openness and performance to be 'cute and endearing', later commissioning her to build his first suit. Other fursuiters that have influenced Kaskae include Digby, Syber, JD Puppy, Flux, and many others.

Though not directly involved with the furry fandom, Keziah's solo pop-punk/post-hardcore project LOVE//LOST references the fursuiter Dogbomb in a song title of the same name. The song is a tribute to Tony Barrett, who passed away in April 2019 from ALS. Profits generated from streaming and downloads of the single have been donated in full to the ALSA, with Keziah matching each donation 100%[1]. Keziah cites Dogbomb's final weeks as the inspiration for bringing him back into the fandom, having been inactive for many years prior.