Karn (of) Thunderhoof (real name Edward) is a furry who lives in Kitchener, Ontario, Canada.

Karn has been in the fandom since May 2010 when he decided to join the Furry Teens forums. At that time, he went by the name Odin Mills.

Karn has hosted furmeets, and he is involved in almost all the Ontario furry forums. 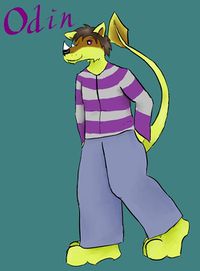 Odin, Karn's original fursona, was a Great Dane-dragon hybrid he called a Draog. Odin had a long dragon's tail and two spikes on his nose. He also had both scales (on his chest and tail) and fur (everywhere else but his hair). These scales and fur were both yellow and, in spots, faded into brown. His hair was a tint of red and usually covered his left eye. Odin was almost always drawn in a hoody with white and purple horizontal stripes.

When he changed his name to Karn Thunderhoof, his fursona became a Highland bull.[1]