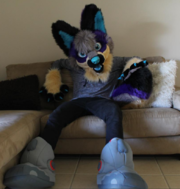 KaiGShep (often shortened to simply Kai; also known as SparkleGShep or Sparkle, born September 21, 2000)[1] is a YouTuber and fursuiter who lives in Brisbane, Queensland, Australia. His YouTube channel has more than 6,000 subscribers as of September 2017. [2]

Kai's fursona is a black and tan German Shepherd with blue and purple highlights in his fur.[4]

Kai's fursuit was built by LupeSuits[5] and sold as a pre-made partial, Kai's unboxing video of the fursuit (since made accessible to Patreon supporters only) earned him recognition and the first subscribers to their channel.

Kai became a regular YouTuber in 2016, with over 15 videos on his main channel as of September 2017. His content consists of sketches, informative videos, and collaborations related to the furry fandom.