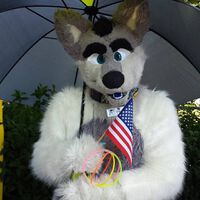 Julien The Wolf is a YouTuber, Fursuit Maker, Dancer, Entertainer, Voice-over Actor and Fursuiter who lives in Orem, Utah, USA.

Julien's fursona is a long-tailed Ivory, Silver, Black, and Blue Arctic-Grey Wolf. It originally had black toes on his back right paw, black paw pads and blue claws and a black nose. It was later changed to having blue trim between fur colors. The current design also has a blue nose instead of a black one.

Julien The Wolf owns one fursuit. They are the creator and designer of the fursuit which they also built themselves. They are planning to have a fursuit business named "Silver Belly Wolf" (SBW). Julien is the co-founder of the company.