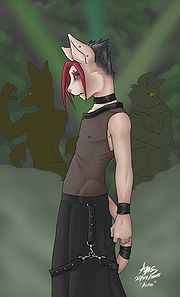 A picture of Aine by Jotun

Jotun is a furry artist, who has produced work for Alex "Osfer" Vance's website Osfer's Joint and character pictures of his fiction series Maranatha, as well as for K. M. Hirosaki's Blue Forest series. His website is hosted on pft.com.

Typical traits of Jotun's art include small eyes, anatomically-detailed hands and lanky, homoerotic, with semi-violent themes in character portrayal, and hairless, smooth-featured bodies in soft colours which would seem to run counter to 'furry' art, as no obvious 'fur' is present.