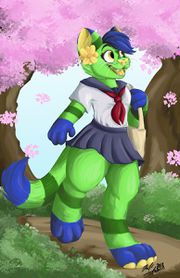 Hana, Bex's primary fursona, as drawn by herself, for the Fur the 'More 2018 con book. 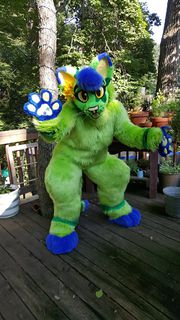 Jolteon Kitty, otherwise known as Bex, is a visual artist and fursuit creator based out of rural Pennsylvania., USA. She is the owner of the costume and fursuit-creating company, Gold Ribbon Studio.

Her name originates from her enthusiasm for the Pokémon Jolteon, of which she has an extensive collection of merchandise.[1] She is currently attending art school for a Bachelor's Degree in the Fine Arts.

Bex's primary fursona is a green cat named Hana, the fursuit of which she also designed. Aside from Hana, Bex possess over a dozen different characters she identifies with,[2] having constructed fursuits for several of them.

Bex also dabbles in art, creating drawings of both furries and humans. Outside of her furry artwork, Bex has done illustrations of many famous drag queens, either as themselves or as furry versions of their drag personas. Most notably, Bex created a fursona for Dragula Season 2 winner Biqtch Puddin, who endorsed her work by posting it on their Instagram.[3] Bex regularly attends drag shows whenever possible, citing a great love for the art form.