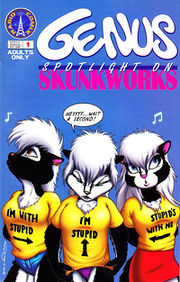 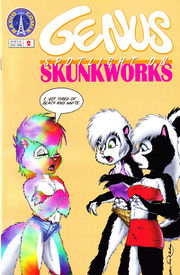 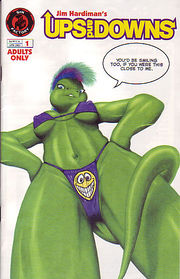 The Ups And Downs 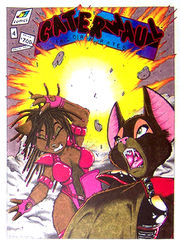 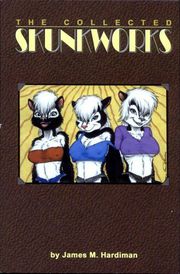 James "Jim" Hardiman was a known fandom cartoonist and illustrator most active during the 1990s and early 2000s.[2] He is best known for his Skunkworks, Caterwaul Incorporated and The Ups and Downs comic series, and the creation of a trio of young skunk characters, Lori Parks, Oynx and Natasha.

Jim often worked alongside fellow furry artists such as Shawntae Howard, Max Black Rabbit and Desiree Lee (among others), in various personal and third party projects, such as A Study in Black and White, AnthropoMORPHINE and In The Zone, a 64-page comic book intended to cover the costs of cancer treatment for Michael-Scott McMurry (Zonie). In 2010 he was approached by Jason Canty of Angry Viking Press to work on further Skunkworks and Caterwaul Inc. comic books and even some animated shorts ideas.

Jim Hardiman's works and contributions were submitted for consideration for both the 2002[3] and 2012[4] Ursa Major Awards.

In 2012, Jim teamed up with Angry Viking Press to conduct a Angry Viking Press: Moving into 2013 with new publishing Kickstarter campaign, offering The Collected Skunkworks TPB, commissions and dakimakuras featuring a selection of Jim works as campaign perks.[5] Part of the goal was also to raise funds to publish a revised edition of the Skunkworks paperback, along with new Caterwaul Incorporated comics and the first Penance The Bear collected works book.

On May 31, 2015, 9 months after his death, Hardiman's mother, Pauline Hardiman, announced that she and her family would scan all the media that Hardiman had promised Jason Canty for the The Collected Skunkworks project after a face to face meeting with Canty so it would finally be published.[6]

On August 31, 2015, just over a year since Jim's passing, Jason Canty announced on his Kickstarter that the Skunkworks book is finally done and will be sent out for printing.[7]

On February 2, 2017, Jason Canty has finally confirmed the final approval of Jim's mother regarding shipping the Skunkworks art books. The art books have been printed in 2 volumes because of the large amount of art that has been collected from both Jim and several contributing artists. Volume 1 will be 150 pages and volume 2 will be 182 pages, respectively. [8]

In 2002, Hardiman developed eye problems relating to Diabetes Type 1 Mellitus.[9] Sean Rabbitt, owner of Rabbit Valley, let his customer base know of Hardiman's medical situation (including Hardiman's lack of medical coverage), and after the story being picked up by the online furry news magazine Flayrah,[10] fans started contributing moral and financial support.[11]

Due to his illness, Jim cut short both his art output and convention travels, occasionally posting new works in various image boards when time and health permitted. Meanwhile his close friend Desiree Lee continued to draw and publish the webcomic By The Tail with his characters.

When he (or Desiree) had new media to share, Jim would post them to his Skunkworks mailing list, in addition to such sites as Fchan, to prevent some users from doing so against his copyright wishes.[26][27]

Even with the adult nature of the series, there was a healthy dose of humor and wit. The girls are often shown as being exhibitionists, and their antics frequently get them into trouble, along with making life hell for Jim.

Jim Hardiman had said on several occasions[citation needed] that Radio Comix never paid him for any artwork submitted, nor did he received any of the financial aid derived from the Skunkworks Reflections tribute book: