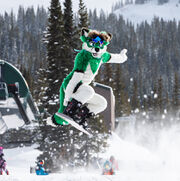 Jib Kodi is a professional animator from Canada who currently resides in the United States.

Jib joined the fandom in Spring of 2017. He is a Furry animator and a Fursuiter. He was the Guest of honor at Furpocalypse 2018 and VancouFur 2019.

His fursona is a cross between a fox and a husky. He wears a blue ski goggle with "Awooo" labeled on the straps. At conventions, he is often seen wearing a digital badge which display his animations.

Jib’s fursuit was created by Dont Hug Cacti and it debuted at Midwest FurFest 2017 which was also his first time attending a furry convention.