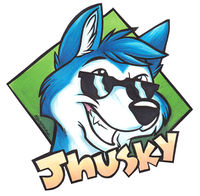 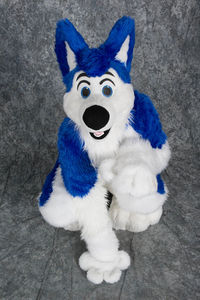 Jhusky (pronounced Jus-Key) also known as Jay was born on June 20, 1991 in the north suburbs of Illinois. He recently graduated with his bachelors in Music from The University of Iowa, he plans to pursue music by studying to be an instrumental Technician.

Jhusky's first fursuit was premiered as a partial at Midwest FurFest 2010, and then again as a full suit at Furry Connection North 2011. The partial was designed by RupeeMurchant on Furbid and the bodysuit was created by Reimori. A new suit has been purchased and this suit has now been retired as of Anthrocon 2013.

Jhusky's second fursuit was premiered as a full suit at Anthrocon 2013. The suit was made in full by Kipper_Otter on Furaffinity. The suit is a toony version of Jhusky's original character.

Jhusky is the current owner of the IowaFurs page on Fur Affinity, where he established the Iowa Fur Finder to find furs in Iowa and the Iowa Con List to show which furs are going to which cons from the state of Iowa. He regularly attends events in Iowa.