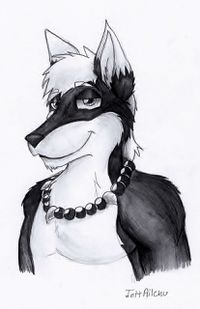 Jett Ailchu McCulley (born May 8th 1992) is a Fursuiter and Artist from Pennsylvania, U.S.A. He is better known by his Fursona, Jett, a wolf.

Jett began getting interested in the furry fandom at an early age, and has been an active artist ever since the creation of his Fur Affinity account in 2011. Jett made Furry Connection North his first ever convention in 2013.

Two of his closest friends on the fandom are ilbv who is a small Human that Jett rescued from the cold before gobbling him up and Rusticdragon20 also known as Thunder, who happens to be ilbv's older Brother.

In 2012, Thunder and Jett became Mates and together they have six children.

The family all live together in Jett's Family Castle in Ireland. ilbv is the only Human and is constantly preyed upon by these hungry predators.

Jett and Thunder would never hurt their precious human, but feeling him squirm inside them is a feeling they enjoy immensely. There are many artworks and Stories about this trio's voracious adventures.