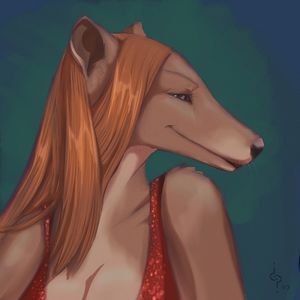 Jennifer Dixon, as drawn by Earwig

Jennifer Dixon (alias Elle Dante on stage) is a character in the series Stories from San Iadras by foozzzball.

She is a fur, part of a fourth generation production run of approximately a hundred and eighty clones initiated by the Estian corporation for commercial purposes. Her batch/serial number is TLC-0A-3113.

Jennifer appeared in the original Stories from San Iadras posted in various places online, such as the defunct FurRag.

She appears briefly in Jill's 49th, is briefly mentioned in Dangerous Jade, and the author has revealed via Patreon that Dog Country originally contained a lengthy subplot focusing on Troy Salcedo and his relationship with Jennifer. As of 2021, the author has stated they are in the process of rewriting some of this cut material for publication. [1]