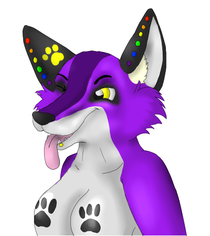 A headshot/bust of Jeneric as drawn by Zoophilic.

Jeneric (also known as MagicNinjette; born October, 1991) is a purple and white lynx-wolf furry who resides in central Massachusetts, U.S.A. She is a student studying graphic/print design, an artist, a jewelry maker, and an avid traveller.

Jeneric has been an active member of the fandom since late May 2009, but had exposure to the fandom for several years prior. As of March 2010, she had only attended one furry convention, Furfright, but she has also attended a number of local/regional meets. She was a moderator at Furry Teens for about six months, starting in October 2009.