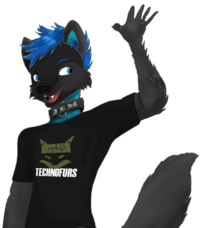 Jem Kegawa is a fursuiter who lives in Columbus, Ohio, USA,[1] with his wife. He is a full-time web developer doing consulting work for Improving Columbus. He has a BSA in Computer Science and an MBA, specializing in Entrepreneurship, from Capital University.

In 2014, Jem took on the role of webmaster for Morphicon, a position he maintained after the convention became known as AnthrOhio.[2]

Jem's character is a black and blue wolfsky (wolf-husky hybrid).[1] He does not distinguish personalities between himself and his fursona.

In 2013, he designed and built a fursuit of the character, made of ten parts for various types of wear, between partial and full. It includes a fan system in the head, movable jaw, and is flexible enough to allow strenuous activity such as DDR.[3][4]