Originally from South Carolina, U.S.A,[1] Jeanne-Marie studied printmaking at the University of South Carolina where she completed her Bachelor of Fine Arts degree in 1994.[2] After living in Liverpool, England, for several years, she returned to the United States to study painting at the University of Memphis, where she completed her Master of Fine Arts degree in 2004.[3] 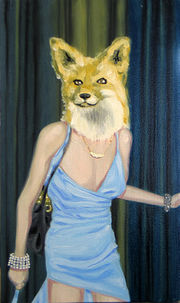 Example of Jeanne-Marie's artwork: I am more likely to be here than not to be here; Oil on board; 2010.

Jeanne-Marie creates art in traditional media, including oil paintings and graphite drawings. Her anthropomorphic figures have the heads of animals but the bodies of humans.