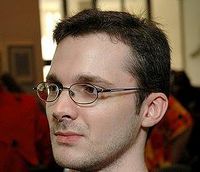 While working as a Kinko's employee, Naylor drew adult anthropomorphic art in his off time. Naylor created the cat character Fisk Black as a brother to Mat Sherer's creation Lucy Black. Naylor drew a series of images which appeared in a portfolio called Spank in 1999, and later appeared in Genus under the title Rest Your Gun Here. The images featured Fisk having sex with Tisha, who was the mascot for Furrymilitia before the website was founded.

In 2003, Naylor registered his website, Jaynaylor.com, which hosts pay-only adult content. that same year he created the webcomic Better Days, which focused on the development of Fisk as he grew up in Georgia. Although popular, the comic received criticism[citation needed] for its portrayal of controversial subjects, including incest and racism.[citation needed] Adult comics based on the Better Days characters were also produced.

During the production of the comic, Sherer feuded with Naylor, as the two had shared the characters of Fisk, whom Naylor created, and Lucy, whom Sherer created, in their comics, Better Days and Badly Drawn Kitties. Following the end of their relationship, Sherer killed off his comic's version of Fisk, and has openly criticized Naylor.

Naylor's second webcomic, New Worlds, was set in an 18th century fantasy world. An adult comic featuring New Worlds characters, Mercedes & The Wolf, was also produced. Naylor abandoned the comic in the middle of a chapter, and has stated he plans to eventually rework the story from the beginning to be less of a comic and more of an illustrated novel. Naylor also created the non-furry science fiction war comic Hell For Humanity, which was abandoned in 2006.

In 2007, Naylor began producing the adult series Huckleberry Ann, which loosely parodied The Adventures of Huckleberry Finn. Another adult series, Haukaiu The Hero, was based upon the Lutrai species created by Ollie Canal. Fans of Ollie's comics criticized Naylor's Objectivist-themed take on the setting. Naylor countered by stating that Ollie gave his permission for Naylor to use the species, but never stated whether Ollie approved of the storylines. Naylor ended the series after a while, claiming that he dislikes working with characters that he didn't create. In 2008, Naylor began The Fall of Little Red Riding Hood, inspired by Little Red Riding Hood.

In 2009, Naylor ended Better Days and began a new webcomic, Original Life, which focused primarly on the children of Fisk and Elizabeth, and featured lighter, comedic storylines. In 2011, Naylor feuded with cartoonist Isaac M. Baranoff. Naylor claimed that Baranoff's publisher, Mystic Studios Productions, refused to publish his comics,[2] and used his Twitter account to insult Baranoff and his comics. Baranoff announced that Naylor's claims were untrue, and that he never offered to publish Naylor's comics; Baranoff responded to Naylor's insults by insulting Naylor on his blog and mocking him in his comics.[3]

Naylor initially drew with a rougher manga-based art style, before developing a cleaner, cartoonish art style which he currently uses. His works sometimes include painted elements, and occasionally color, although the majority of his comics are monochrome. Naylor's influences include Phil Hendrie,[4] and Bloom County, which Naylor cites as having influenced his political views.[5] Naylor has also expressed admiration for Calvin and Hobbes[6] and Lackadaisy.[7]

Naylor is an objectivist, stating that he "traditionally lean[s] right of center".[10] These politics are often reflected in his work, which lead to some heavy criticism of his comics, most notably his character, Fisk Black.[citation needed] He has also expressed being pro-gun ownership rights as well as supporting the Second amendment.