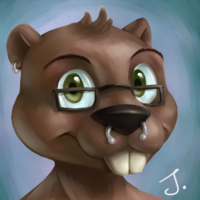 Jaxen Beaver, previously known as Jaxen Grey (born February 16, 1982), is an anthropomorphic artist and member of the furry fandom. He is originally from the state of Vermont, USA, but now lives in Florida. He is married to 40oz Hyena.

Jaxen's fursona is a cisgender male North American beaver (Castor canadensis) with medium-to-dark brown fur and a grey tail. His eyes are green, and he wears black-rimmed glasses. He has a septum ring, and one ring in each ear.

Jaxen's art is generally toony in style, with some minor influences of illustrative realism. He works primarily in digital media, preferring Corel Painter and Adobe Photoshop, though he occasionally will use traditional art tools as well, such as graphite, ink, and colored pencil.