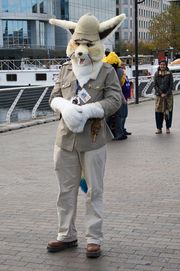 Jasper Wallace at his RBW debut.
Jasper Wallace is a furry who lives in Wolverhampton, England.[1] His fursona, a fennec fox, is a veritable gentleman and very proper. He is an African explorer and hunter, and is (almost) always well-dressed.

Jasper's fursuit was built by himself under the name Clam Soup, and debuted at RBW 2010[2], but has since been retired.

Jasper has plans to build a new fursuit, using a new character.

The man behind the ears[edit]

Jasper's interests include science fiction, pirates, musicals, good films, and good living. He is also involved in LARPing, prop making, and by day works in the heady world of banking. Jasper is also a part time model, and keen vocalist. He has also been described as an 'anthropomophic megaphone', due to his ability to shout rather loudly.[3]Always looking out for friends, new and old, Jasper has been an active participant of the fandom for a number of years. He continues to do so, and has great pride for all that it has achieved, on an organised, and personal level.

Jasper has been a regular at the Birmingham Fur meets, for some years, since about 2008. He started out by attending the twice monthly coffee meets, and helped the rise of the monthly Saturday meets. He has also been known to attend the occasional LondonFurs meet.

In 2015, he made his first steps in to the world of convention staffing, by volunteering for ConFuzzled's theming department, and in 2016, progressed to the position of crew, in the same department, and continues to do so, helping any way he can, to give back to the community that he has been a part of for so long.

Jasper in the media[edit]