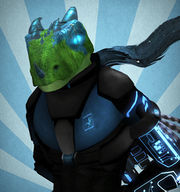 Jasonafex, also known as Vergence (born July 3, 1991), is a furry artist, animator and podcaster from Western Australia. He is engaged to artist Kabier (Genesis), and lives with her in Caledonia, Ontario, Canada.

Jasonafex's fursona, Vergence, is a cross between a lizard and a raptor.

Jason creates Flash animations based on other artists' static images. Most of his animations use Kabier's art.

In 2014 he announced he was working on a furry adult dating game titled Amorous, releasing a demo of the game in November of that year.[citation needed] The full game was published on Steam on April 13, 2018.[1]

He also began work on a furry adult fighting game named Bare Backstreets,[2] and published a demo version of the game before cancelling development in 2015.[3]

The Bad Dragon adult toy "Dexter" is based off a design for Jasonafex's fursona's genitalia, designed by Jasonafex, which won a Bad Dragon Labs Staff Pick.[4]

Jasonafex began a podcast in 2017 titled The Cuckshack, where he discusses events in the furry fandom and hosts members of the fandom as guests.[citation needed] The podcasts are often released with an accompanying animation of his and his guests' fursonas' mouths moving and gesticulating in time with the speaker.