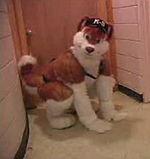 Jase W Husky is a fursuiter from Leesville, Louisiana, USA. As his name suggests, he is a red and white husky. He wears a sled-dog harness and, often, a pair of yellow goggles over the tuft of his hair.

Jase is also a big lover of canines, owning several huskies and other breeds. He is an undertaker of projects, organizing and wiring computers, networking and is really into DDR. He loves to suit both in the privacy of his own home as out in public when the urge hits him. Never a friendlier fur if there was one, he is not one to turn down a friend in need and will go above and beyond for anyone who he considers a friend.

Jase is a complex individual, having a gambit of friends and social lives that any normal person would probably fall short of achieving, attending camps for people with pulmonary problems, to setting up a haunted house each year as well as attending a host of other events not all of which are furry.

He was an attendee of Mephit Furmeet X in 2006, and has been to many others since then. His frequent visit cons seem to be FWA, RCFM, MFM, and Oklacon. He was The Fursuiter Guest of Honor at Fangcon 2015.[1]