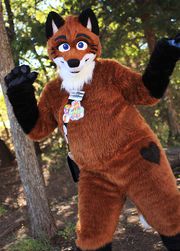 Jared Fox on his debut at Oklacon.

Jared Fox is a fursuiter who is mated to Kodi Wolfe and lives in Moore, Oklahoma, U.S.A.

Jared started a monthly fur gathering in Moore, where furs and fursuiters gather to bowl and hang out. Sometimes the event has special themes to make it more fun. In April 2013, Jared passed the monthly furbowl onto Misora to keep the meet going and moved down to Waynesville, MO.

At the beginning of 2012, Jared was asked to join the Fuzzy Productions board to replace Cutepuppy who was stepping down due to personal priorities.[citation needed]

He has appeared in fursuit at: