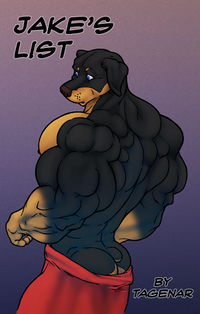 Jake's List is a furry novel by Tagenar. It was published by FurPlanet in June, 2011, and is rated NC-17 for graphic sexual situations.[1]

The novel's cover art is by Nudog, colored by Wuffamute.[1]

Jake's List tells the story of Jake, who has been a weightlifter and a lady's man since he was in middle school.[1] High school is now four years in the past, and Jake has a decent job and a good grip on life. Then, while his guard is down, he ends up in bed with another male.

Now Jake is questioning everything he thought he knew about himself. He faces possibilities he never considered, and, as he looks back on his life, he begins to wonder if he was ever the rottweiler he assumed he was.