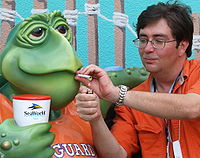 He's the one on the right

Daniel Boatright also known as JR or Jackrabbit is a furry who lives in Orlando, Florida, United States. His fursona is a hare.

He is an amateur stand-up comedian, best know as the puppeteer behind the characters Poink T. Ferret & Hugh Manatee on the Funday PawPet Show. He has spun these characters into a regular mature-rated podcast called Poinkcast which can be found on iTunes, Poink’s Fur Affinity page and Weasyl page, and on various internet streaming shows. He also performs standup at various conventions, including Anthrocon where he started out opening for 2 the Ranting Gryphon and now has his own shows. He put out his first Standup CD in 2013, titled No Remorse

JR was also one of the founding members of the Furry Convention Megaplex, handling various roles over the years including the charity auction, programming, GOH coordination, and scheduling and art direction, as well as being a member of the conventions Board Of Directors. He resigned from the convention in 2013.

JR currently co-hosts Anthrocon’s Annual Masquerade with his Funday PawPet Show castmate Kuddlepup, and has taken a more active role in coordinating and running auditions for it.

JR is engaged to Babs Bunny