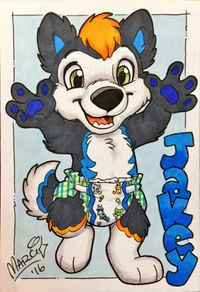 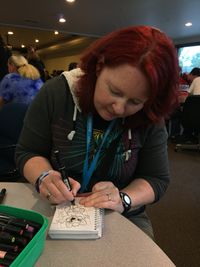 Jākē's commissioned Marci McAdam badge, being drawn depicting himself as a HuskyWolf, from Lucifur's Meat & Greet 2016.

Jake (Jākē {pronounced as Jakey} or ltl.Jakey) Sherlock (born July 28, 1985) is a babyfur enthusiast and artist in Calgary, Alberta, Canada. His fursona is a cub husky/wolf. He became married to his current and only wife, Vanessa Sherlock, Nov 15, 2004 and they have a daughter and a son born July 2017. He operates Araro Graphics & Printing Inc. in his home basement, creating mostly cut vinyl art but also other print projects. He works by day for The City of Calgary as a Transit Operator and moonlights as an Uber driver.

Jākē was chosen as the Publications and Signage Lead for the second year in a row for the Canadian Conference Fur-Eh. The 2018 theme was 'Paws Vegas'.

Working with Marci McAdam and creators of the BetterDry brand, Jākē used art elements from Marci McAdam to create the new Crinklz designs 'Space' and 'Sea'. The new designs where completed beginning of December 2017 and went to manufacture mid-January 2018.

Working mostly as layout artist under the title Publications Lead, Jākē created the entire layout for print using inspiration from the theme as well as incorporating all the other artist's works; written, drawn or otherwise. The direction of the book for 2017 was to create something to take home and keep. A risky redirection was incorporated by excluding the panel listings as well as schedule and instead creating a secondary fold up map for easy reference.