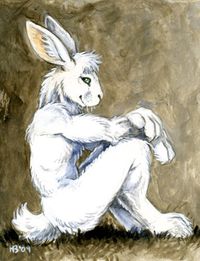 Istanbul has always had an interest in anthropomorphic animals, and joined the furry fandom itself in 1995.[3] He is a fan of furry art, music, streaming, and writing, and is a writer and streamer, with stories published in conbooks for Oklacon and Anthrocon and a Twitch channel that has been running since 2013.

Istanbul is the founder of Furry Fiesta and was Convention chairman in 2009, 2010 and 2011 until passing the role to Glass Ferret. He has held several roles on Furry Fiesta's staff, from Scheduling to Hotel liaison, from Charity to Media liaison, among others. As of the 2017 event, he took on the role of Tabletop gaming staff. He exited his role as Furry Fiesta staff in 2018.

He was a main cast member on the KnotCast podcast until November 2, 2010, and he was a founding member of the Fuzzy Logic podcast, an adult-themed general advice podcast.

Istanbul is the former headwiz of Pokémon Slide, a pokémorph-themed MU* that also welcomes humans and non-anthropomorphic pokémon characters], until it shut down on 2013.

Istanbul aided in the creation of Tails and Tornadoes Fur Con as an Advisor and Social media lead in 2019. He parted ways with the organization before the 2019 event, but he rejoined to act as an advisor, social media lead, event coordinator, security, and registration in 2021. In 2022, he stepped back in his involvement to re-take his originally intended role of Gaming track co-lead.

Istanbul's fursona is a rabbit.