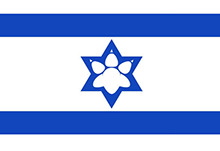 Israeli Furs flag, made by MoodyFerret

Israeli Furs, also known as IL Furs refers to the general furry population living in Israel, and to the number of similarly-named communities which cater to them.

As of November, 2021, The Israeli Furs community consist of around 300 members, and around 25 of which who are fursuiters.

Concidering its small size, the Israeli Furs community have had a large number of social groups and servers on a couple different platforms, dedicated for the local furries to chat in.

Over the years, the Israeli Furs community has had several Telegram chats. The first Israeli Furs telegram group to be created was made in 2016[4] was at the time the most active furry group in Israel. It was closed in early 2021 due to the group owner not transferring ownership to a different admin before choosing to leave the group, resulting in the erasure of thousands of messages and memories.

New Telegram groups opened along the way, for adult 18+, and general groups for everyone, as well as a meetup group for everyone to organize meetups in.

Several discord servers were created for the community.

The first one was abandoned due to inactivity, and later integrated with the current most popular server to create a new discord community - Israeli Furs, owned by Pumpkin the fox.

An Israeli Furries Steam group exists for all the Israeli Furs who are gamers.

A facebook community named Israel Furry Fandom was made. When it was found around 2017-2018, a lot of these members migrated to the original Telegram Group.

Several Amino communities existed for the Israeli Furs, yet none of them became very successful / big. These communities later migrated to Telegram and Discord.

Several different websites were created with dedication to the Israel Furs community.

The Israeli Furries website was initiated by Skie Nightfall in 2008 and maintained by IceDragon.

In current time, the website needs fixing due to an HTTPS feature from the host which glitched the configuration of the website; and the website itself being outdated.

A Israeli Furs member named Simba opened up a forum that was running from around June 2016 to August 2017.

The forums did not catch on, which resulted in inactivity, and the website later being shut down.

An archive of the website can be viewed with the help of WayBackMachine.

Israeli Furries is a website founded by Kovuah which holds information about the Israeli Furry community and provides links to social groups and servers.

The website features a language toggle between Hebrew and English, and will feature mascots in the future.

Kovuah also maintains Israel's FurAffinity group page which holds a similar idea- to maintain a list of groups and information about the Israeli Furs community.

Znavot is a meetup group which will be in charge of coming up with meetups, private and public for the Israeli Furry Community to enjoy.

The VillaFurmeet was an event that happend on october 31 2022 and at the time was the biggest furmeet, boasting 47 people, the event itself happened in a large Villa in the city of Hadera IL. The event lasted 1 day and the activities included Dugeons and Dragons, a pool party, a fursuit 101 Talk and a Halloween party/dance. The event was organised by roy otter, arnavi and hoot minerva. with hoot acting as the event finance