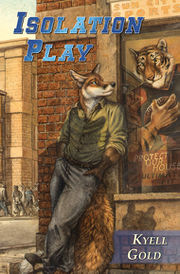 Isolation Play is an anthropomorphic novel by Kyell Gold, with cover and interior illustrations by Blotch, published by Sofawolf Press. It is the sequel to Kyell's novel Out of Position. The title and cover art were revealed at Midwest Furfest 2010 and it was released at Further Confusion 2011.

The story begins moments after the conclusion of Out of Position and focuses on the professional football career of Devlin Miski, a tiger, and his romance with Wiley "Lee" Farrel, a red fox.

After Dev comes out on national television, both the tiger and his boyfriend, Lee (a fox), are relieved that the dilemma is finally over. Lee meets a sports writer, Hal Kimmel (a swift fox), who has recently went through a bad breakup. Lee introduces himself as Ms. Lee White. Dev gets a call from his mother and decides that he should introduce Lee to his parents. Lee is hesitant because of his own troubles with his parents after Dev met them in 2006; but agrees to meet them. Lee tries to come out to his boss Morty during work, but chooses not to when Morty tells him that if a scout dates a player who gets drafted for pro football, they could both lose their jobs. Lee calls Hal and the swift fox asks if he can get a quote from Dev. Ogleby, Dev's agent, sets Dev up to star in a TV commercial for a new sports brand underwear, which frustrates his teammates. After they shoot, Dev realizes Ogleby has been giving his phone number to news reporters to help boost his fame. During a game against Millenport, Fisher (a tiger), gets his leg gored by a boar on the opposing team and both Fisher and Dev are removed from the game after a short tussle on the field. The Firebirds win the game anyways, and afterwards, a crossdressing fox by the name of Argonne tries to offer Dev a blowjob, which he rejects.

Dev takes Lee to meet his parents during his time off. His mother, Duscha, gets along with Lee great, but Lee has trouble connecting with Dev's father, Mikhail, over dinner. The next day, Mikhail and Lee talk privately outside the house. When Lee insults Mikhail for his bigotry, the tiger breaks his thumb and warns him to stay away from Dev. Dev takes Lee to the hospital where he is put into a cast. During the check-up, Lee lies about what happened to his thumb in an effort to respect Mikhail's wishes of keeping drama within the family. Afterwards, Dev retrieves their belongings from Mikhail's house and storms off in anger.

During an interview with the Today Show, Dev snaps at the interviewers when he is questioned about his family. Lee witnesses this as well as the Ultimate Fit Dev filmed earlier and find that it is more graphic than either of them anticipated. Later, Dev flies back to Chevali for practice, which has grown in intensity because of Fisher's absence. After working out, Gerrard (a coyote), invites Dev and Lee to his house to watch some football games. Dev is reluctant but after talking to Caroll, his fake fiancé from the previous book, he agrees to invite Lee. Lee gets an email from a gay football player by the name of Vince King. Lee goes up to his college to watch him play and witnesses how he interacts with his teammates. Lee tries to talk to his father, Brenly, about him bringing Dev home for Thanksgiving but is turned down. That Sunday, Dev and Lee visit Gerrard's house where they meet his wife, Angela, and the rest of the team and their spouses. Most of the team warm up to Lee quickly, especially Charm and Fisher. During the visit, Dev is asked about his relationship with a male fox. Lee is upset that he isn't invited to play a quick game of basketball with the other guys, but the boys make up afterwards when they go back to Dev's apartment. The next day, Hal reveals that he contacted Dev's and roommate from college and discovers that Lee changed his look. When Lee reveals his true identity, Hal leaves.

During a game against the Gateway Tornados, Dev is pushed over and cracks his ribs, but helps the Firebirds block a kick later on. In the end, the Firebirds won 10-9. After the game, Mikhail asks to meet Dev for dinner. But the conversation takes a turn for the worse when Mikhail says Dev is no longer welcome at home unless he breaks up with Lee. When Dev returns home, he forces angry sex with Lee to vent out his frustrations. Lee devises a plan to force Mikhail to do the right thing and accept his son by convincing Hal to publish the story to the media. Lee makes amends with his father over a drink, during which he discovers that his mother joined a group known as Families United, who object the homosexual agenda. Lee flies down to watch the Firebirds go up against Highbourne, the former of the two winning the game. Dev becomes frustrated because of the loss and Corey, the cougar that originally had his spot, is back and recovering from his injury fast. Duscha tells Dev about the article Kimmel publish about Mikhail kicking him out of the house. Lee confesses to having pushed the story to be published. The boys fight resulting in Lee walking out. As he rides down the elevator, he worries about this fight being the one that splits up him and Dev and what to do about his future. Once the doors open, Dev pushes Lee back into the elevator and tearfully kisses him. After another make-up sex session, Dev calls his mother in another attempt to reconcile with his parents but Duscha tells him it's no use.

Lee comes out to his coworkers after thinking about the rough week; his coworker Alex (a rabbit), is accepting but Paul (a stag) remains distant. Mikhail calls Lee and blackmails him: If Lee breaks up with Dev, he won't tell the public about their relationship. Lee passes it off as an empty threat. Lee tells Dev about the phone call. The Firebirds travel to New Kestle for a game against them. Corey, whose leg was gored by one of their opponents, is put into the game during the second half and targets the same stag that gored him by breaking his leg, which gets him penalized. The Firebirds win anyways. At work, Lee is confronted about his relationship with Dev by the owner of the Dragons and is fired. That night, Dev meets Argonne at his hotel. As security escorts him out, Argonne hints to Dev he had an affair with one of his teammates, which leads Dev to believe there is someone else who's gay on the Firebirds. The next morning, Lee tells Dev that he got fired because of an anonymous tip. Dev quickly pieces together that Mikhail made good on his threat and told the Dragons about their relationship. Lee has lunch with his former boss Morty, who reassures him that he can't help the fox get another job. After a phone call with Hal, Lee decides to confront Mikhail and end the drama once and for all. Dev tries to convince him otherwise, but Lee drives up to Lake Henderson anyways. When he arrives at the auto shop, Mikhail tries to fight Lee. Thanks to Lee's self defense classes, he accidentally throws Mikhail off and hits his head on a toolbox. Mikhail is taken to the hospital and Lee is taken to prison for the night. The next day, Lee visits Mikhail in the hospital, where the older tiger agrees to not fight with him amymore. Dev surprises everyone by skipping practice and showing up at the hospital, accompanied by Hal Kimmel. Duscha invites Dev to Thanksgiving and accepts that Lee is a part of his life. They all leave the hospital with Dev glad the ordeal is over. Lee responds by saying, “It's only the beginning.”

Devlin "Dev" Miski- a tiger who is a gay football player who plays weak-side linebacker. Dev is Lee's boyfriend and Mikhail and Duscha's son.

Wiley "Lee" Farrel- a gay red fox who works as a college scout for the Dragons. He is Dev's boyfriend and Brenly's son.

Hal Kimmel- a swift fox who works as a freelance reporter.

Argonne- a fox roadie who tries to seduce Dev

Corey "Killer" Mitchell- A cougar who plays on the Firebirds team. Was originally a weak-side linebacker before Dev took his spot.

The Isolation Play audiobook was narrated by Jeremy Sewell and was published in 2013 by Kyell Gold on audiobook streaming website Audible. The narration is 13 hours and 57 minutes long.